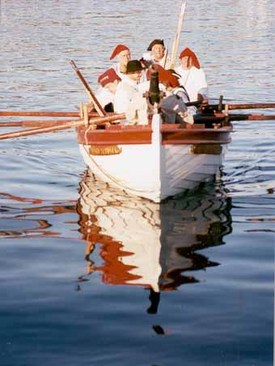 
Among the first vessels ordered into service by General Washington in 1775 (nearly a year before we had a Navy) were one hundred armed boats. This type of boat was used to conduct raids against British shipping in Long Island Sound as well as against military targets on Long Island itself.

Because Huntington played such an important role in the resistance to the British occupation, the Town of. Huntington decided to build a replica of one of these boats to commemorate our Nation's Bicentennial. 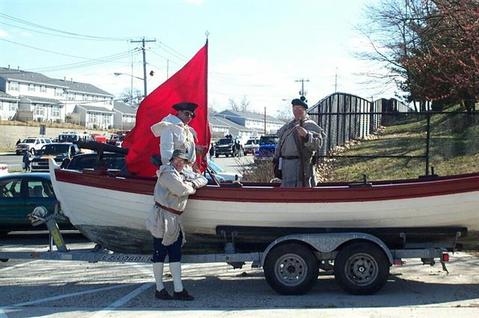 Using plans drawn by the renowned Naval Architect, William A. Baker, the construction was begun by volunteer craftsmen in 1975. A year later, the boat, christened the HENRY SCUDDER, honoring a prominent Revolutionary War hero from Huntington, was launched.

The HENRY SCUDDER is 25 feet long, six feet wide and about one-ton displacement. It is constructed with an oak keel, oak frames and planked with white cedar. She is equipped with 16-foot oars, a rudder, 17-foot mast. a spritsail and a swivel gun in the bow.

The HENRY SCUDDER commemorates the past and offers an opportunity to our present generation to appreciate an important aspect of our American heritage. The reconstructed whaleboat is now under the command of the Huntington Militia. She has participated in various historical events, both in Huntington and elsewhere. Sea-going and Land-loving members of our group have interpreted the history and use of the whaleboat in America's War for Independence.
The HENRY SCUDDER was retired from service in 2011.The boat will become a museum display in the near future in the Town of Huntington.
,