The first flag flown in Huntington was probably the British Red Ensign which is a red flag with the King's Colors (pre-1812 Union Jack) in the upper left hand comer. In the year of Huntington's Declaration of Rights, 1774, the word Liberty was added to he front of this flag and George III to the back. On July 23, 1776, when word of the Declaration of Independence reached Huntington, a crowd was assembled on the Village Green, the flag lowered and the King's Colors and the word George III were ripped off the flag. An effigy of George III was constructed, he was stuffed with those parts of the flag removed, run up a gallows and blown up with a gunpowder. This left a red flag with the word Liberty on its face.

The following month, the flag was carried into the Battle of Long Island and was captured by the Hessians. The original flag found its way to a museum in Dresden, Germany. It is believed that the flag was destroyed with the museum during the air bombing of Dresden during World War II. In 1975, the Huntington Liberty Flag was designated as the official flag of the Town of Huntington.

The Huntington Militia reenacts this actual event - the day the Liberty Flag was created - annually on the spot it took place on the Village Green in 1776 at their Huntington Independence Day event.
Check our schedule. 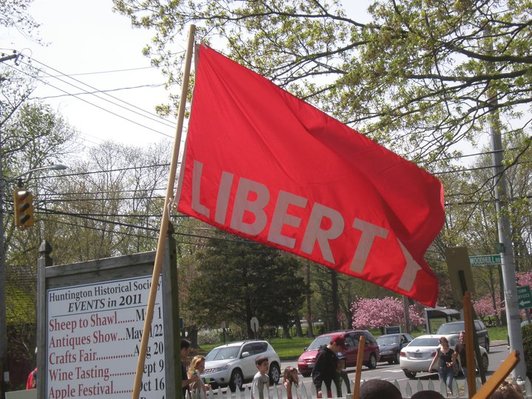