HISTORY OF THE HUNTINGTON MILITIA

The Ancient and Honorable Huntington Militia is one of the oldest organizations in the United States. It-was formed in 1653 by the Town of Huntington to provide an effective defense against the hostile Dutch settlements of New Netherlands and to keep the local Indians in awe by holding regular, public training exercises on the Town Common. Huntington was made part of the Colony of New York in 1664 and the Huntington Militia became part of the New York Provincial forces in 1666. For generations, the Huntington Militia trained on the Town Common once a month and consisted of one company of infantry until the 1760's when a second was formed. Over the years, trained volunteers from Huntington served honorably in the French and Indian Wars. At the outbreak of the Revolutionary War, the Huntington Militia voted to form an independent company to defend the town in the name of the Continental Congress, thereby dissolving the two existing companies. It soon formed the nucleus of the first Suffolk County Regiment of Militia and raised several companies, which later fought in the Battles of Long Island, Harlem Heights and White Plains.

After the Battle of White Plains, the Militia as a unit did not follow the Continental Army into New Jersey, however some militiamen as individuals enlisted in various mainland regiments. The unit then dispersed. The militiamen not returning to Huntington formed a shadow organization of guerrilla fighters in Connecticut to raid occupied Long Island.

The militiamen who returned to their homes in Huntington during the British Occupation (1776-1783) were pressed into a forced labor company. When. the Revolutionary War ended, Huntington reestablished the Militia. The Huntington Militia continued to be active under the New Republic and was called out for active service during the War of 1812 and the Civil War. In modern times, however, it was eclipsed as a military force by the National Guard System. Thereafter, it continued only as a social group whose members marched in annual parades until the 1920 's.

The Huntington Militia was reactivated by The Town of Huntington in 1974, to serve in a ceremonial capacity as its official Colonial Guard and to continue as a permanent, living link with our proud heritage. The militia became a Revolutionary War reenacting unit in 1976 and continues to this day to preserve its heritage and recreate life as it was on Long Island in Colonial America. The Order of the Ancient and Honorable Huntington Militia is now a New York State Education Corporation. It is a not-for-profit, 501C3 corporation and recognized as a charity. Donations are tax deductible. 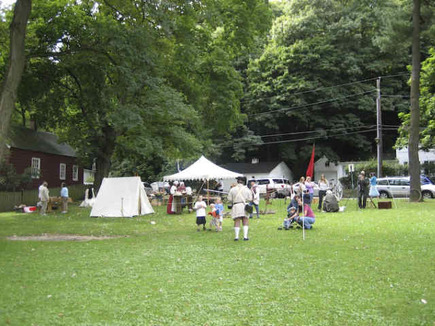 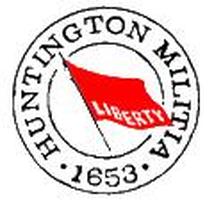